We Think Sofia is Cute

We think Sofia is cute because...

1. She lets Mommy give her a side ponytail and then patiently forces a smile for the camera even though she'd rather be coloring. 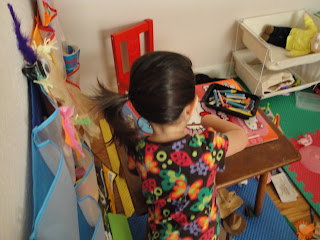 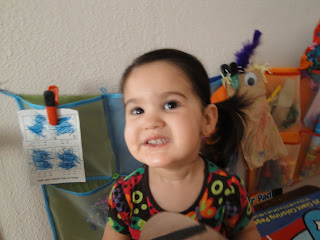 2. She loves to ride the horsies at the Fiesta up the street. At 50 cents a ride we're going to go broke one quarter at a time! 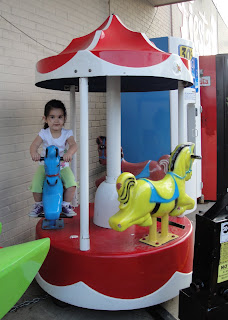 3. She just is! She loves her new duck shower cap. 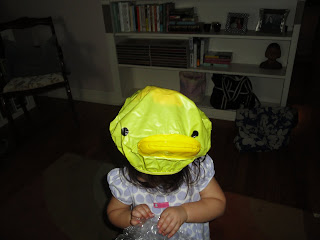 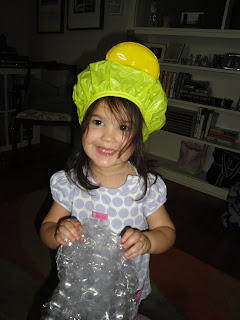 Posted by Coussirat Clan of Houston at 8:52 PM 1 comment:

I've been helping Emily scour craigslist for a rocker for Baby K's nursery and I stumbled upon one that she loved. I agreed I'd go take a look at it since it was here in Houston. Well, northwest Houston. I dragged Dan and baby Sofs in the middle of rush hour and we headed out to take a look.

The longer it took to get out there the more frustrated Dan became. He declared he must really love me to agree to this. By the time we got there he said he didn't care what the damn chair looked like, we were buying it.

So, oops! When I saw it I realized that it was really too small for Emily's use but we forked over the 30 bucks and brought it home anyway. Because we thought it may one day be great (with a paint job and new fabric) for Sofia's big girl room one day. She loves it! 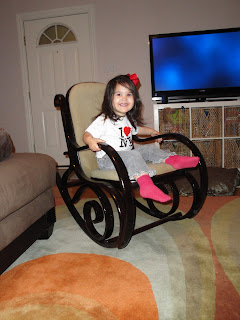 It's an Eames style rocker and I've been drooling over them since I studied Mid-century modern furniture during my two year stint as an interior design major in college. And I say "Eames style" because it's a total knock-off but I'm still happy with it and will happily keep the $600 dollars in my pocket. Ok, really. Dan wouldn't let me get a real one. Well, I didn't even ask. But I digress. 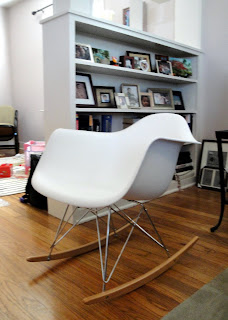 So it came in. And I love it as much as I thought I would. Sofia loves it too; she loved it more than I thought she would. She loves to climb in it and sing, "rock, rock, rock!" She drags it from room to room, saying how much she loves her rocking chair. "Mommy give it to me," she'll explain. The best part is no matter where in the house I find it, it looks good!

But what Sofia loved even more than the chair itself is the fact that they packed it with a 5 foot strip of bubble pop! It was her first introduction to bubble pop that's not on the iPhone game and I think she's spoiled for life. She even let us in on the action. It really made for a fun family activity. 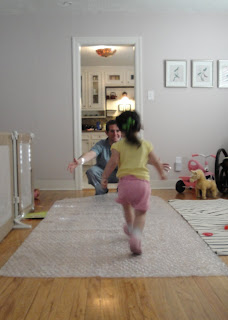 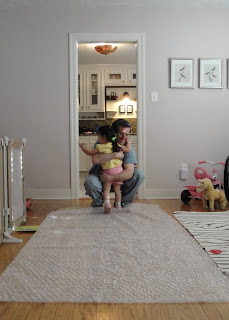 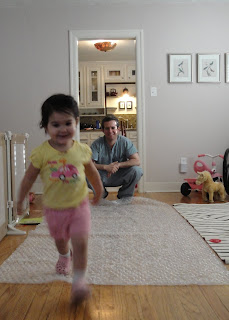 We did lots of jumping. It was as much fun for us as it was for her. It was a lot of noise. And a lot of cute. Need proof of just how cute?

And for a final furniture story...

As I was doing some housekeeping the other day (no, I still don't have a housekeeper!) I cleared off the coffee table, wiped it down and then moved on. As I'm in the kitchen Dan and I hear Sofia laughing and then she screams,

"Yook, guys, yook!" (She doesn't pronounce her L sound yet.)

We go into the living room and this is what we see. 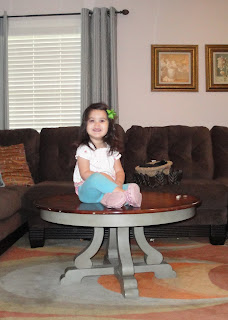 and instead of snapping at her to get off the table, we don't climb on furniture in this house, blah, blah blah. I said, "Wait! I need to take a picture."

I had to take a picture because it reminded me of this. 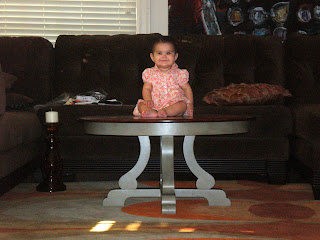 Remember this post from September of 2008 with Sofia as that 10-month old cutie?

The only downside is that now she gets really confused when we tell her to stay off the coffee table. I know she's thinking, "but you guys thought it was so cute before..."
Posted by Coussirat Clan of Houston at 9:00 PM 1 comment:

The Park with Daddy 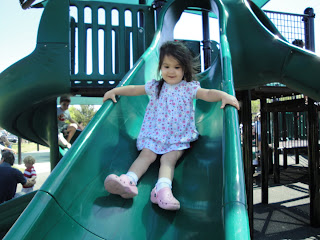 Daddy took Sofia to play at Memorial Park. Can you believe how big she looks or is it just me?

I loved this series of pictures. Sofia can get easily distracted and it could take quite a few tries before you can get a remotely decent smile from this kid. 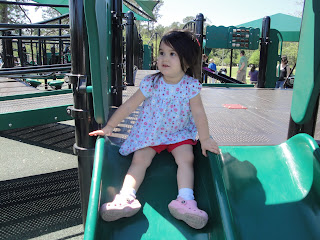 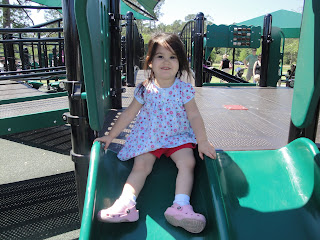 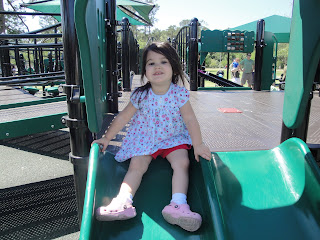 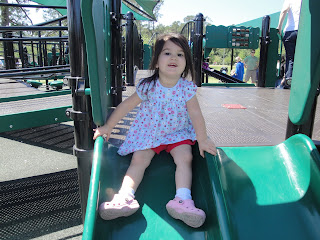 But he managed to get this sweet one which captures her pretty well... 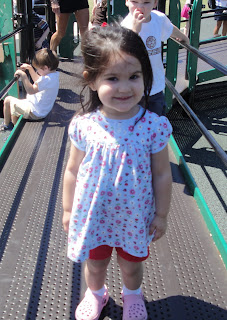 Posted by Coussirat Clan of Houston at 6:31 PM No comments:

Today Bobo turns 73! Can you believe it?

So yesterday, in preparation for Bobo's birthday Sofia colored a party hat and got her toy birthday cake all ready. And she prepared a little message for Bobo.

Happy birthday, Bobo! We love you.

By the way, take a look back at the first birthday message Sofia ever recorded for Bobo here.
Posted by Coussirat Clan of Houston at 10:26 AM No comments:

I explained to Sofia how I had painted the mobile which hangs above her bed for her before she was born. "When you were in Mommy's tummy," I explained.

She looked at the mobile for a second, then turned to me, "I want to go back in Mommy's tummy," she requested. Very seriously.

It reminded me of my Mom, especially on this day, April 29, what would have been her 65th birthday.

I can't go back either.

Happy birthday, Mom! We miss you and love you.
Posted by Coussirat Clan of Houston at 9:33 AM No comments:

Blogs I Read | Life and Home